A clutch of stuff from around the web: what photo buyers want from your web site, what technical tests don’t tell you, retouching before the age of Photoshop, some photography business resources and a piece about putting all the technical stuff into context. But first…

An example of why you should back up your stuff

Unlike many stories about the importance of backup, this one has a happy ending. Matt Kloskowski, of Lightroom Killer Tips, is teaching at Gulf Photo Plus in Dubai and found that a cloned copy of his MacBook drive, Fedex’d from the US, reached him just in time for him to be able to teach his first class after his internal drive failed. Read Matt’s story here and if you need to, you can remind yourself of our recommended Lightroom backup strategy.

This is one for younger photographers. Joerg Colberg over at Conscientious has a typically interesting article about retouching and improving negatives and prints—and we’re certainly not talking about scans here. Take a look. (If, like us, you’d rather stick with your Wacom tablet, we mentioned an excellent Photoshop book for photographers in this post a couple of days back.)

Though it’s usually John Harrington or Dan Heller making the running in this area, it’s worth keeping up with Photoshelter’s information on running a photography business. They talk about SEO, workflow, licensing, selling and more. Obviously, they’re trying to sell you Photoshelter accounts (not a bad thing—we’ve used Photoshelter and might cover their services in a future article) but the information is good in its own right.

What people say they want isn’t always reliable—we know that.

There’s a Nikon story that says when the company surveyed its professional customers about an emerging technology called autofocus a couple of decades back, it learned that pros couldn’t care less about it. Hindsight reminds us that autofocus happened to be a bit slow and rubbish at the time. Perhaps it’s not surprising today, then, to learn that when other companies took the idea seriously and released decent autofocus systems, Nikon quickly lost a bushel or two of market share. The company had believed its survey results and hadn’t taken the idea of autofocus seriously enough. I don’t think the pros who answered the survey were lying: they really believed that they didn’t want autofocus and they just happened to be wrong.

Henry Ford is famously quoted as saying that if he’d asked his potential customers what they wanted, they’d have asked for a faster horse. You get the idea.

Now, with all that said, take a look at this result from a survey of photo buyers:

Above: an excerpt from the Photoshelter 2009 Buyers’ Survey.

That’s fairly representative of the surprises in store in the survey. If you’re reading this, you almost definitely have a web site for your work or are at least thinking of building one so look at this Photoshelter page about what photo buyers say they want from photographers’ web sites. The big surprise for me when I watched this last year was the general lack of love for big photos and the overwhelming demand from buyers for thumbnails of small photographs. That seems to run counter to the trend but then, new trends often don’t survey well, as the stories above suggest. (I share photo buyers’ loathing for auto-playing Flash sites, as it happens, particularly if they begin to play music without being asked.)

If the survey page whets your appetite, there’s also a presentation of the buyers’ survey results in an hour-long movie. Its glacial pace makes it a little frustrating at times but there is actually some very useful information in there. If you’re just about to build a site or overhaul one and you make sales online (or hope to), it’s definitely worth the hour spent.

What tests don’t tell you

There’s a very good article from the inestimable Ctein about what tests don’t tell you, published on Mike Johnston’s outstanding site The Online Photographer. Ctein provides an example of how banding (which you see often see in high-ISO work, especially when you push a low-light exposure) is rarely reflected in the noise measurements of digital cameras that you see online, even though it’s a form of noise. He uses it as just one example of how tests can be incomplete. The comments that follow the article are just as relevant, too.

Ctein is a wizard, famous for his dye transfer prints, among other things. Even his regular small inkjet prints (we have a couple in the form of some Christmas cards that he mailed to his supporters last year) are something special. Kodak once called him the world’s best printer and I can believe it.

And finally… putting all the technical stuff into context 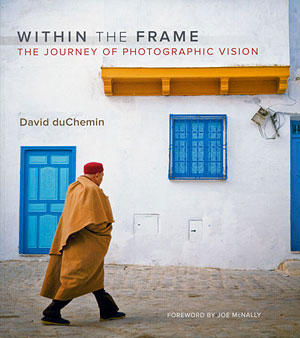 Photographer David duChemin is the writer and photographer of a very warm, uplifting book called Within the Frame (Amazon US

), a book of travel photography and the author’s approach to it.

Last week, David published on his blog a piece called Confessions of a So-Called Pro to help put all the technical stuff into context and remind us what’s really important about photography.

I often leave my ISO dangerously high. I get more email about why I shot something at ISO 800 than anything else and that tells me (a) I should get my act together and (b) y’all need to lighten up on the whole ISO issue.

Well said. David duChemin also publishes electronic books for $5 each and if you like his work, you’ll enjoy this audio interview (free) that he did with Ibarionex R Perello for The Candid Frame podcast. I probably shouldn’t have been surprised to hear that Mr duChemin was once a standup comedian…

You can get all our articles for free by e-mail or RSS. We run one-on-one Lightroom courses in London for professional photographers and serious amateurs, although in the light of David duChemin’s article, above, perhaps “serious” isn’t the right word…

Thanks to our friend Danny De Vylder, who sent us our copy of Within the Frame last year and introduced us to David’s work.